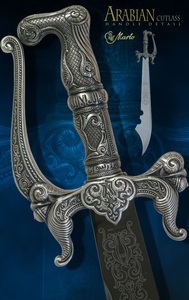 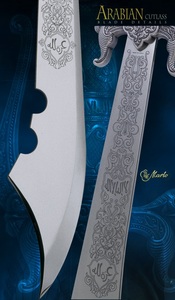 Used by the Muslim armies during the period of the Crusades it is later considered to be typical of Arab horseman. The Scimitar is a sword with a short curved single-edged blade, broadest at the point end. Although the scimitar was used by both Turks and Persians, many Islamic traditions adopted scimitars, as attested by their symbolic occurrence, e.g. on the Coat of arms of Saudi Arabia or the traditional surik in the Coat of arms of East Timor. There were given various shapes to the cutlass in past times and there was an important Toledan production of them during the Moorish period in Spain.

A sample of this cutlass can be found in the "Museo del Ejercito" in Madrid. Its main characteristics are the crossward, which raises to the handle on one side and descends to the blade on the other side, and its wide curved blade. This beautifully stylized cutlass is a reminder that Toledo was an important center of sword production during these historical Arab Islamic periods.