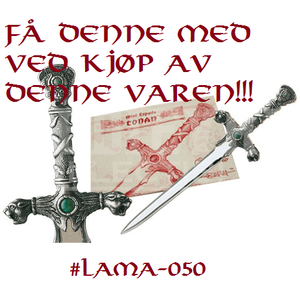 Sword of Atilla the Hun

(circa 406-53), king of the Huns (circa 433-53) One of the most feared and notorious barbarians of all time, Attila is believed to be of distant Mongol stock, he ravaged much of the European continent during the 5th century AD. Apparently Attila was as great a menace to the Teutonic tribes people as he was to the Romans.

There is a story that he claimed to own the actual sword of Mars, and that other Barbarian chiefs could not look the King of the Huns directly in the eyes without flinching. Attila's haughty step and demeanor expressed the consciousness of his superiority above the rest of mankind; and he had a custom of fiercely rolling his eyes, as if he wished to enjoy the terror which he inspired. In his own day he and his Huns were known as the "Scourge of God," and the devastation they caused in Gaul before the great Battle of Châlons in 451 AD became a part of medieval folklore and tradition.